During World War 1, around one and two thousand Turkish Jews  arrive to Spain coming fron western Europe, the majority of them were residents of France.  A great percentage will return to their homeland after the war.  A few of them will stay.  In May the 6th 1919, nearly two months after the Treaty of Versailles was signed, the new statutes for the Comunidad Israelita de Barcelona will be approved.  Seventeen pioneers fron diferent parts of the world will be the founders.

Barchilon y Benssusan had arrived from Tánger, Matalón, Harari, Beresi, Eskenazi, Haim and Matarasso had come from the Ottoman Empire, Samson Sobol was from Maguilov, Russia, the Metzger brothers, Edmund and Joseph as well as Sigmund Kirschen came from Central Europe.   Based on The Law of Association, they signed the regulations, establishing as president Edmund Metzger, secretary Enrique Talarevits. And as head of religious matters, Alberto Alazraki.  They rent a place to be used as  synagogue in  a chalet at 250 Provenza Street.  During the first years they occupied only the lower floors and a part of the garden.  This would be the first location for the Comunidad Israelita de Barcelona after the expulsión in 1492. 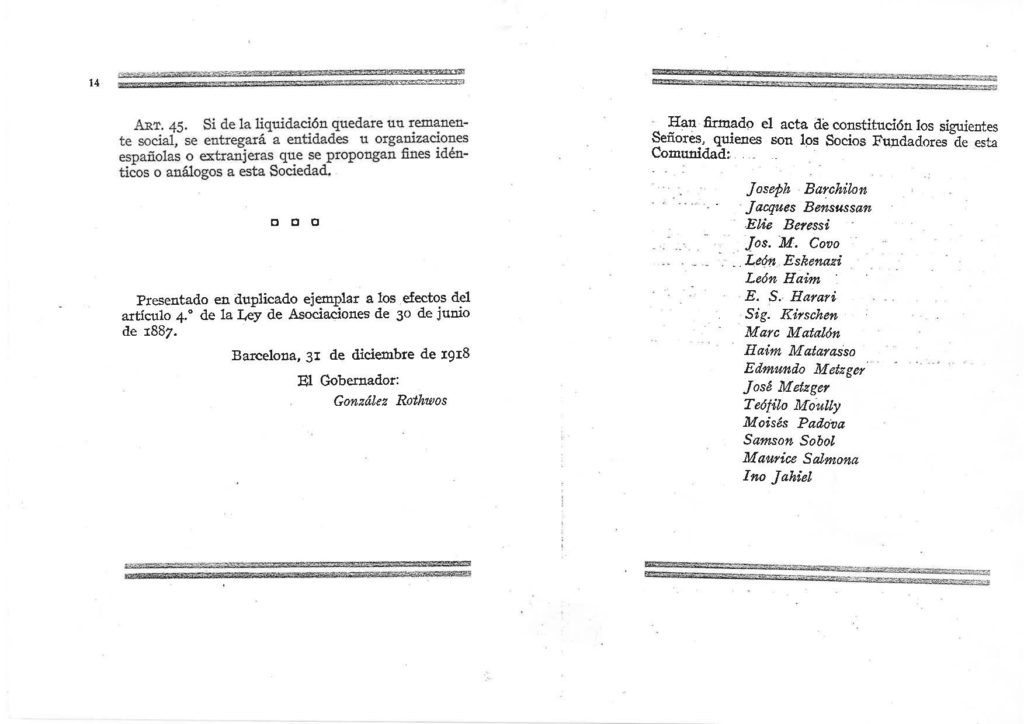 Once WW1 was over, Jews from the eastern Mediterranean kept coming to Barcelona because of the economic crisis and the proliferation of nationalisms.  The Jewish comunnity of Barcelona kept on growing. The next wave of Jewish immigrants will come from Russia, they were escaping from the bolchevique revolution.  In 1925 there is an estimate that the Jewish population in the city was one thousand people, this number will double itself three years after.